As a child I remember playing cowboy and Indians and grabbing the broom pretending it was a galloping horse that transported me from adventure to adventure.  Later pastimes included collecting plastic horses along with cowboy and Indians.  I loved my collection and even nibbled away at the horses little legs trying to transform some of them into ponies.

Years later we did have a pony and I realized that a horse is not a ‘free ride’ by any means.  There’s work to be done.  The reward was when they would put their heads over the corral, give a gentle woof and shake their manes waiting to hear your secrets.  All for the price of a carrot:) Alas, our equine ownership was very short lived but  when around stables, I can never pass up the opportunity  of a chance to stroke a soft nose and look into those dreamy eyes.

Some horses are well kept pets but then there are the others that were left to fend for themselves. The horses from Return to Freedom wild horse sanctuary once roamed the plains.  They along with many others are being removed from our public lands throughout the country.  Some end up protected on a private preserve a in Lompoc California where they are fortunate to have a dedicated crew care for them.  The sanctuary welcomes the chance to educate the public and offers tours, one of which I took.

I would have been better off bringing the 2nd camera already set up as there wasn't a lot of time for switching lenses.  The difficulty was magnified by the fast motion  and the horses coming within a short distance.  All in all, it was very similar if not the same thing as bird photography in which you latch onto a focal point and stick with it.  I like to say that familiarity of a scene breeds content and I am sure that a second trip would produce better results.

Walking through the pastures among the different herds was an experience.   The herds were distinct and varied in color and stature. It was touching to watch the band interact and the distinct personalities that came through.  Horses are social herd animals and most had their own buddy system going on.

For my picture of the month well I got greedy and I chose two. First, I was intrigued by this dapple gray mare as she trotted around with the setting sun hitting her mane and then by two bay’s as they galloped neck to neck past me.

I ’m not an expert on equines by any means but this was well worth the trip to see how important it is that we preserve not only our open spaces but the animals that inhabit it.  Conservation is ongoing and it is up to us!

For those that wish to help, the Sanctuary welcomes donations.  www.returntofreedom.com 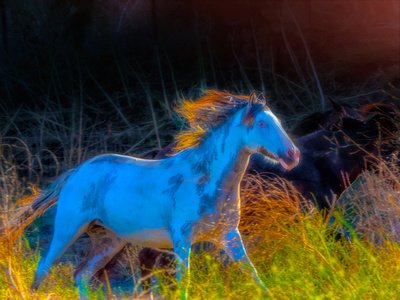 PATRICIA DENNIS PHOTOGRAPHY
Thank you Dorothy!
hugs, Patricia
Dorothy Atkins(non-registered)
This is just beautiful and of course your story about riding the broom handle. I can relate to that. In those moments imagination was key and we had all day from sun up until the porch lights came on to dream and play. Thank you for such lovely reminders.
No comments posted.
Loading...
Subscribe
RSS
Recent Posts
A Different Light Five in Seven Happy Holidays Reminiscing when travel was an option A gift to you free download Slides and notecards A cat's tale Alien or not? One day at a time What Cha going to do?
Keywords
photography Nikon landscape hobby camera scenery Dennis Patricia patricia dennis animals
Archive
January February March April May June July August September October November December
©Patricia Dennis Photography
Powered by ZENFOLIO User Agreement
Cancel
Continue