While there is always something interesting to photograph, the fall holds special promise with the many variations of autumn color.  The vegetation and scenery unique to an area take on their own individual display and offer something different.   But where to go?  My research on the internet was definitely interesting but how is one to tell when the peak autumn actually hits an area? Having to plan time off and arrange plane flights don’t always coincide with Mother Nature!  But, we gave it a shot!  It wasn’t until I took a breath and looked back at my calendar that I  realized how much travel I had packed the two months in search of those autumn colors!!  And as I reflect back I realized that somewhere along the way, the focus of the quest for the  'perfect leaf' diminished and I was content to savor the moment.

It all started September 21st when I went with Suzanne to Oregon. We stayed at the Red Lion on Janzen Beach where restaurant view looked out at the bridge crossing over into Vancouver Washington.  The weather kept true to tradition and rained off and on.   Pretty forceful at times, but  in the end , it resulted in some pretty magnificent clouds.  We joined an 8 hour tour of the Columbia River Gorge. We stopped at Chanticleer Point and were able to see the incredible views overlooking the Columbia River.  The historic Vista House was on the route and awarded   another spectacular view of the river.  Stopped at several waterfalls, including Latourell, Wahkeena and Multnomah where we were able to walk up to the Benson Bridge for a view of the upper and lower falls.   Then onto Bonneville Dam to see the migrating salmon and onto the Hood River area.   The finale of the day was   Timberline Lodge, at 6000 feet.  It was too foggy to see the alpine views but we had a chance to walk through the historic lodge best known for the location of the thriller the ‘Shinning’.   Throughout the tour our guide, Jeff, gave us an ecological history of the area.  Did you know that the largest mushroom in the world is in Oregon?  AND that mushroom is underground and co mingles with the roots of the trees in a symbiotic relationship.    Well worth the $74.00 tour fee!!  But alas, just a few dashes of color among the greenery.  The following day we drove to Albany Oregon to meet up with Jan who then took us to some of the famous covered bridges of the region as well as to Newport Beach where the spectacular Yokina Bridge loomed proud and tall.   Bay Boulevard on the wharf is a popular tourist area, where restaurants, galleries, shops, and attractions such as Ripley's Believe it or Not; the Waxworks Museum and the Undersea Gardens are side by side with working canneries and fish-packing plants.  We watched as shrimp were being unloaded and fish packed.  It reminded me of Pike Market Place in Seattle.  The stay was too short and before I knew it, it was time to head on back to California. 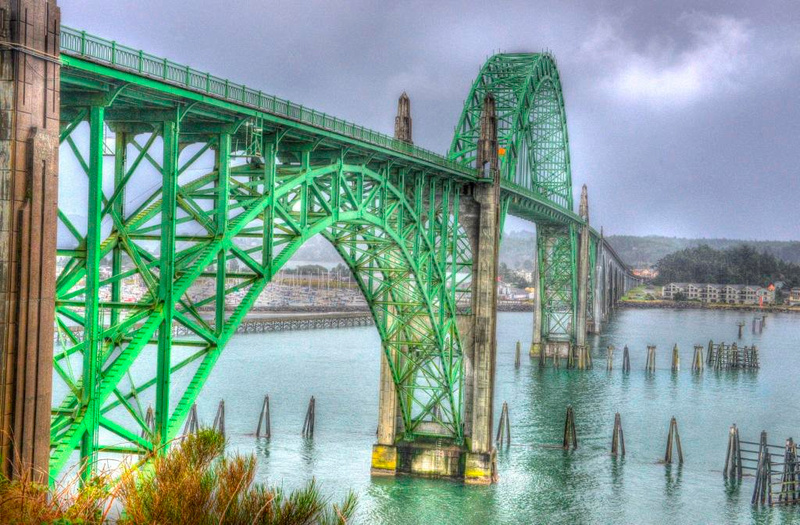 October 6th I took  a day trip joining a boat tour of the Elkhorn Slough at Moss Landing. No leaves here but certainly an assortment of wildlife!  Elkhorn Slough is one of California's largest wetlands and located in central Monterey Bay, California, just a short trip from the Monterey Peninsula and the Santa Cruz area. The wildlife rich reserve winds inland many miles and provides an important feeding and resting place for wildlife. Expertly guided by Captain Yohn,  it was delightful to see otters with pups in hand cavorting in the water. In the background a lone dolphin glided through the area.  Pelicans were in abundance as were the sea lions and harbor seals. The tour is only an hour and definitely one that can be enjoyed by all ages.  The only motion in the ocean was the sway of the boat as photographers shifted angles!  I vow to take my grandsons on this tour! 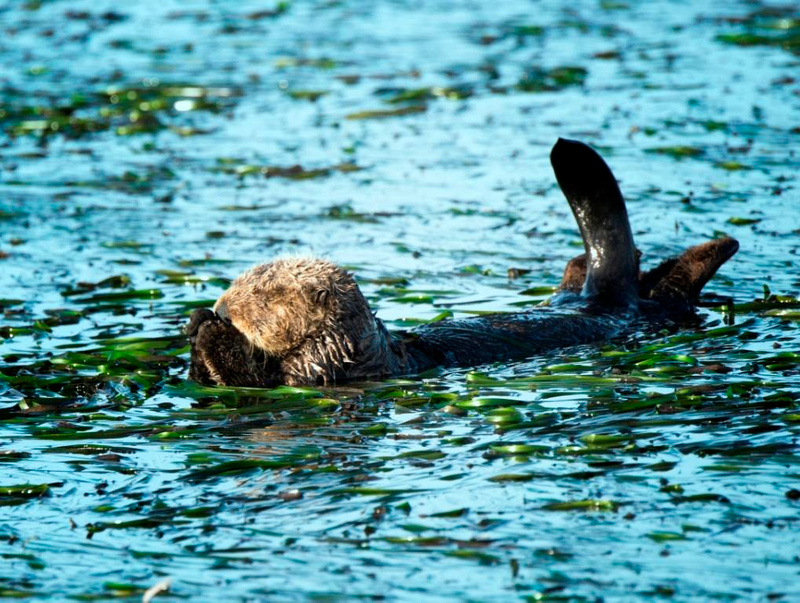 October 11th and there was time for another day trip.  This time towards Napa. The leaves had started to turn and we were hoping to capture some shots there along the Silverado trail.  It wasn’t as fulfilling as we had hoped, but none the less we were graced with some spectacular views of red ivy climbing up old buildings. We stopped at a few spots of interest to capture a lingering grape or two.  Peju winery is always one of my favorite places in Napa as the interior of the building is so colorful!  Then, there is Chimney Rock with those vine planted hills in the background.   The vines at both locations were just starting to change color and the grapes remaining were dried.  We were late for those plump grapes and too early for the full affect of the autumn colors.

October 17th  Len and I were holding our breath that the Government would re open the National Parks and we could take our mini vacation.  Luck was with us and on the 18th we headed into Yosemite.  One of our first views was of Bridal Veil Fall.   This fall flows all year with the peak flow in May.  What we saw was nothing short of spectacular. A glorious rainbow against the rocks which was pretty amazing considering how little water was actually flowing down.

We then continued visiting some of the standard points of interest in the park. Word to the wise, read the signs that a lot of the lakes and falls are dry during certain seasons.  We failed to do this and after a mile hike, ended up at Mirror Lake only to find it dry as a bone.    Yosemite is as always a magnificent place to visit and from one day to the next the colors changed before our eyes.  The dusky greens changed to orange and gold.  I held my breath.  There was promise of the illusive fall foliage but we would not be there long enough to get the full glory of it!

From the heart of Yosemite, we headed into Tuolumne meadows where the mountains of the Sierra near the meadows have some permanent snowfields. We stopped at one point and there was still ice covering the streams!  The temperature certainly had become chilly enough to warrant a sweatshirt. We drove onto  Lee Vining where a glorious cove of aspens fluttered at the end of the road revealing a utopia of delicate color.  A little  further up the road and there was Mono Lake.  This is a large, shallow, alkaline lake.  It is impressive enough from a distance but close up has added interest in the form of unusual tufa (calcium carbonate) pinnacles. The sedimentary rock loams from the bowels of the lake with an eerie out of this world look.   The color around the lake was limited to a few wildflowers but oh my goodness how fascinating these tufas are! 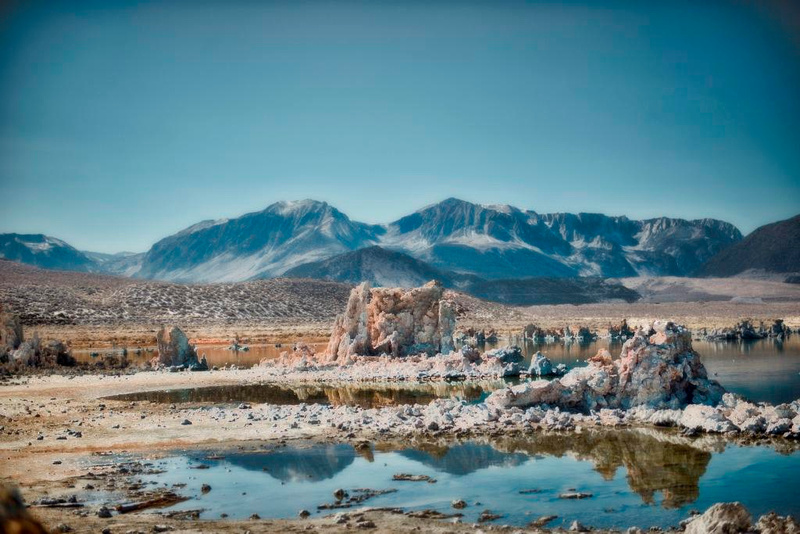 After Mono Lake, Len was a sport and made the detour towards the historical town of Bodie.  No leaves here in this desert town, but well worth the drive.  Bodie is authentic Wild West ghost town which runs on highway 395 near Bridgeport, Ca. To get to the actual town you must travel the last 3 miles of it on a rocky dirt road.   Slow going to say the least and definitely a kidney buster.  As hard as it is getting to it by car, you can imagine how difficult it was to the gold miners.  Today, Bodie is preserved in a state of suspended decay.   There are about  110 structures still standing, including one of many once operational gold mills. Many of the interiors remain as they were left and stocked with goods.  This town is a  prime candidate for HDR shots!  If you look real close you can see Len standing next to the old building.

From Bodie we headed through Bridgeport and over to Highway 89 towards Lake Tahoe.  At the peak of 89 there was a glorious pink sunset that was a perfect ending to the day. 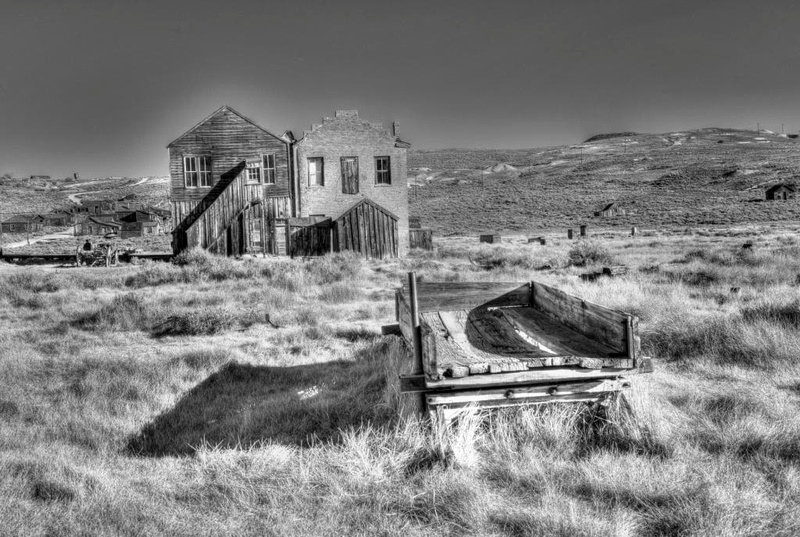 But wait, we are not done!! On October 24th we hopped in a plane towards Oklahoma. Ah, yes a lot of eyebrows rise on this one.  I have relatives in that area and had read that the fall foliage trail was a good one.  I was joining up  with my cousin Barbara who is also a camera buff.  Well we must have gone the opposite direction of the acclaimed foliage trail.  We headed from Oklahoma City to Shawnee, through Little Rock Arkansas, Memphis Tennessee to Behula Mississippi. With all due respects,  I must say that Arkansas with it's mountains was absolutely lovely. Well known for Bass and crapie fishing, the lakes in Arkansas were huge and there were many little swampy outlets.  For this California native, it was very intriguing.  A bit spooky at times as local hikers at one park on the Davenport Lake would all say the same thing “watch out for the alligator”.   As we stopped at one swampy location I felt as if I could feel the eyes of the critter upon me but luckily he kept hidden. 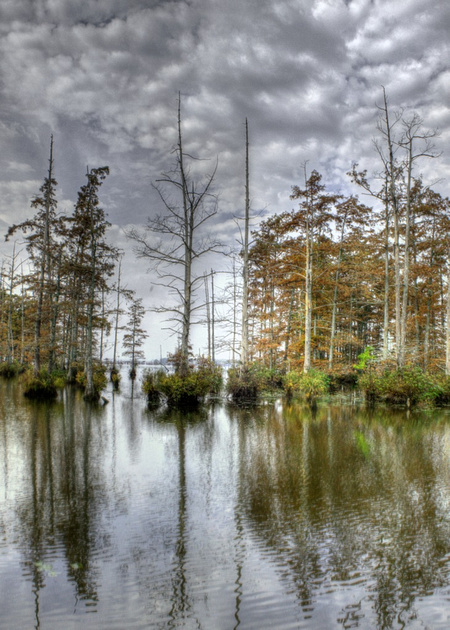 And there are wineries in Arkansas as well!  We stopped at a cute little German one, had a sumptuous meal and I managed to convince Barb to stop so I could photograph a  few hay bales.  She took it in stride.   We continued our adventure to visit another relative in Mississippi who assured us that the fall color there was glorious.   The only problem was the frost hadn’t hit yet to turn those leaves and the color he was referring to were vast oceans of poison oak.  There was however an absolutely marvelous garden spider that I spent way too much time photographing.  Those things are huge! We did get a chance to go to the outskirts of Memphis and stopped to see the Mississippi River which is over a mile in width.  It was large and grey.  Did I say it was really large and grey and the famous Beale street is only two blocks long?  It was something new that I hadn't seen though.  Back in Oklahoma City, Will Rogers Park also had some lovely views with trees and ponds.  The trees  were just starting to show promise of full color when I left.  One week more and it would have been prime.  The time I treasured the most was the visit with my relatives!

Back home on the 31st and then off again to Sonoma wine country where there was still color among the vines.   The scenery as always was lovely  and as an extra treat, we delighted in tasting wine along the way.  Mixing wine with photos in my case does not work.  The results become an artistic blur.  A fun time though!

Here it is November and I must say as I look around my own little neighborhood, fall is truly at its peak.  The apricot tree outside my window is laden with shades of yellow and amber hues.  Across the yard, I see Chinese Pastiche glowing in bright orange. Further down the road, other trees glitter in  shades of gold  and  a splattering of Holly berry trees with their red fruit  can be seen here and there.   The crip air causes you to draw your sweater a bit closer.  Driving down the street, even with the telephone wires emmeshed in the striking foliage, I catch my breath with the beauty of it all.  Here is one place where we did hit the perfect timing.   We just had to sit and wait. 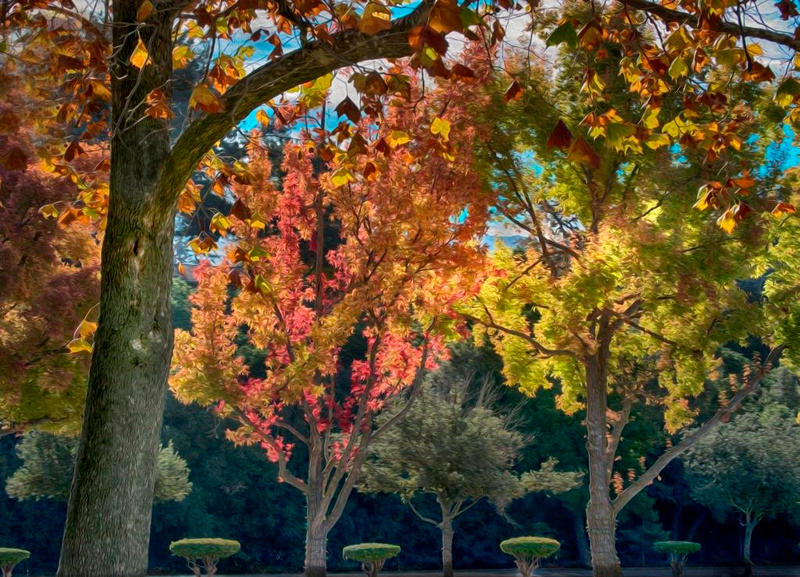